Cargill ship will be largest ever to utilize kite power

Cargill plans to install the SkySails system this December, and hopes to have it fully operational within the first quarter of 2012. 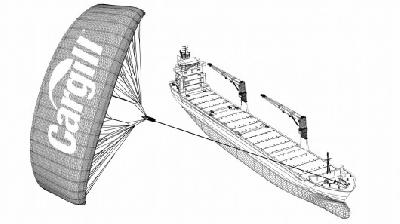 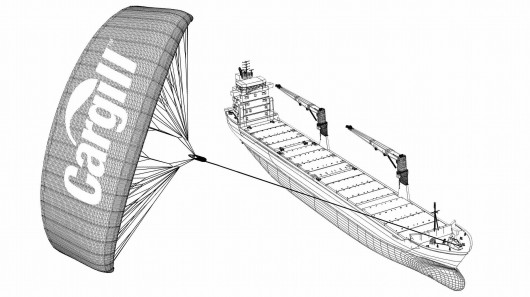 Cargill Ocean Transportation has announced that it will be installing a SkySails wind propulsion system on one of its cargo ships, the largest ever to receive such technology (Image: Cargill)

For the past ten years, Hamburg-based SkySails has been engineering and producing what are essentially giant kites, designed to help ships reduce their fuel use by catching the wind and pulling them across the surface of the ocean. The system was put into regular shipping use for the first time in 2008, when one of the kites was attached to the 132-meter (433-foot) multi purpose heavy lift carrier MS Beluga SkySails. Now, Cargill Ocean Transportation has announced that it plans to use the technology on one of its long-term charter ships, a vessel of between 25,000 and 30,000 deadweight tonnes (27,558 to 33,069 US tons). It will be the largest kite-assisted ship in the world.

The kite will measure 320 square meters (382.7 square yards), and will fly ahead of the ship in a figure-8 pattern at a height of 100 to 420 meters (328 to 1,378 feet). Its flight path will be controlled by an automated system, and the kite itself will be launched and retrieved via a winch-equipped telescoping tower on the bow – definitely a better approach than having someone desperately bracing themselves against the deck of the ship, while clutching a couple of control lines! Information regarding the system's operation will be displayed on a monitor on the ship's bridge, although it is said to require a minimum of input from the crew.

Use of a SkySails sysytem is claimed to reduce a cargo vessel's fuel consumption by an average of 10 to 35 percent annually, and by up to 50 percent temporarily. Due to its "dynamic flight maneuvers," the kite reportedly generates 5 to 25 times more power per square meter sail area than a conventional sail. A study by the United Nations' International Maritime Organization suggested that up to 100 million tonnes (110.2 million US tons) of carbon dioxide could be saved each year, if the technology was broadly applied to the world's merchant fleet.

Cargill plans to install the SkySails system this December, and hopes to have it fully operational within the first quarter of 2012.

Liftings at Port of LA reach record 961,833 TEU in August