The 738-foot Golden Seas was reported disabled and adrift with 20 people onboard at about 10 p.m. Thursday, said Petty Officer David Mosley. 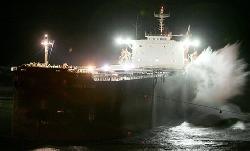 The 738-foot Golden Seas was reported disabled and adrift with 20 people onboard at about 10 p.m. Thursday, said Petty Officer David Mosley.

"The Coast Guard is working with state and other responsible parties to prepare in case this vessel were to have a worst-case scenario, were to go aground and release its cargo," Mosley said.

The ship is 60 to 70 miles north of Adak, drifting southeast at about 2 mph. "It's drifting more toward the islands out there in the Aleutian Chain," Mosley said.

The Coast Guard has diverted the cutter Alex Haley and sent two H-60 helicopters to the scene today, Mosley said. A C-130 was expected to fly to the scene as well, but remains grounded in Kodiak because of a mechanical problem, he said.

The vessel is registered out of Liberia and owned by a Greek company, the Coast Guard says. It was headed from Vancouver, British Columbia, to the United Arab Emirates, Mosley said.

Winds in the area are blowing at close to 50 knots, he said. Gale force winds are expected through Saturday, said a Coast Guard spokesman in Juneau.

Coast Guard officials said it's unclear exactly how much canola oil and fuel are onboard. They are seeking other vessels in the region that could tow the Golden Seas to safety.

It's not unheard of for cargo ships to go adrift in the Bering Sea.

In 2004, six crew members from the Malaysia-flagged freighter Selendang Ayu died after a Coast Guard helicopter crashed during a rescue attempt in rough seas. That vessel drifted without power and grounded on the remote west coast of Unalaska Island.