Back to life, HMM aims to dominate Asia-Mideast trade

FIVE shipbreakers were killed and five were injured within a month, because of a lack of safety gear in Bangladesh scrapping beaches, reported London's Tanker Operator. 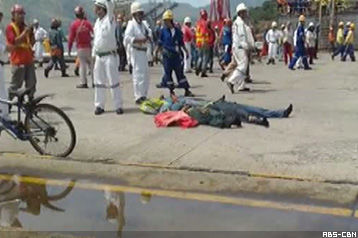 Accidents in Bangladesh shipbreaking yards kill 5, injure 5 more
FIVE shipbreakers were killed and five were injured within a month, because of a lack of safety gear in Bangladesh scrapping beaches, reported London's Tanker Operator.
"On May 23, 21-year old Rubel died at Seiko Steel shipbreaking yard when he fell from a great height," said the NGO Shipbreaking Platform press release.
"He was working without safety equipment. Only six days later, on May 29, five workers were struck by falling steel plates at the same yard which is also referred to as Darussalam or Madina Enterprise," it said.
"One worker died on the spot, another in hospital. The three remaining workers were severely injured".
In a third accident on June 5 at Laskar Shipbreaking, 35-year old Babul was crushed by a falling steel plate. On June 19, two workers fell victim to a cylinder blast at Bhatiary Steel shipbreaking yard, the release said.
"One of the workers, Swapan, died in hospital three days later, while Mayching suffers from severe burn wounds in his face and upper body. He is struggling for his life.
"On June 23, Samesh suffered severe injuries from a fall at Kabir Steel, a yard that was in the headlines in April after Kabir's private security personnel shot at workers and locals protesting a fatal accident," said the Shipbreaking Platform release.
"We are witnessing the same accidents again and again: workers are not equipped with safety harnesses and fall to their death. Others are crushed under heavy steel parts as a consequence of the dangerous gravity method by which cut steel sections are simply dropped into the sea and on the beach," said Platform spokesman Muhammed Ali Shahin
"What is urgently needed is an honest cost-benefit analysis bringing environmental and human costs of beaching into the equation," said NGO Shipbreaking Platform's executive director Patrizia Heidegger.