As many as 50 asylum seekers were believed drowned Wednesday after their boat ran onto rocks on reaching Australia's Indian Ocean territory of Christmas Island. Locals said those aboard the boat - men, women, children and babies - were either Iraqis or Iranians.

Sydney, Dec 15 (DPA) As many as 50 asylum seekers were believed drowned Wednesday after their boat ran onto rocks on reaching Australia's Indian Ocean territory of Christmas Island. 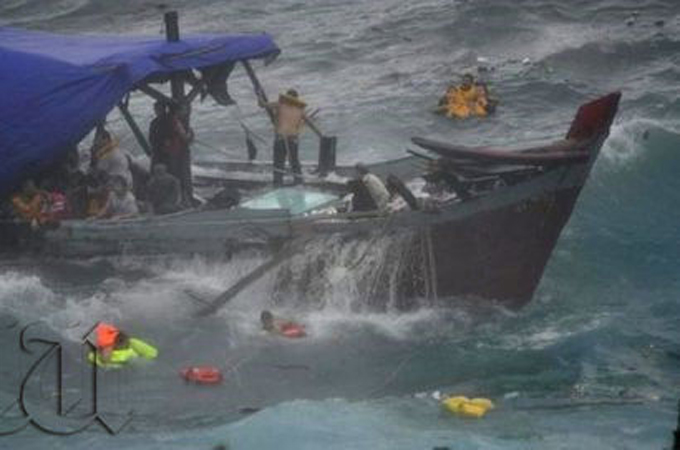 'My understanding is that there are 50 dead and around 30 injured,' Royal Flying Doctor Service spokeswoman Joeley Pettit-Scott told DPA.

The service has sent a jet to Christmas Island to bring three critically injured patients back to Perth.

Locals said those aboard the boat - men, women, children and babies - were either Iraqis or Iranians.

Kamar Ismail, a Christmas Island councillor, said he and fellow locals watched helplessly as the wooden fishing vessel, which appeared to have lost power, drifted for 45 minutes before smashing against cliffs in the three-metre swell.

'We were maybe 3 metres from the cliff, but we just couldn't help. ... It was just too dangerous,' Ismail told the national broadcaster ABC.

A man who said his name was Jacob and was alerted to the unfolding tragedy by the screams of those on the boat recalled valiant but vain efforts to pull survivors from the water.

'There were a lot of people really trying to help them but it was all completely hopeless,' he said.

'Someone would grab on to the end of the rope and everyone together would be pulling the rope trying to help them out of the sea but then the rope would go limp and we'd look in the water and the person was dead.'

Locals said those aboard the boat - men, women, children and babies - were either Iraqis or Iranians.

In recent months, more than three boats a week have been arriving at Christmas Island. They are loaded with mostly Middle Eastern asylum seekers who have paid people smugglers for their passage across from Indonesia's Java Island in rickety fishing vessels.

More than 2,000 asylum seekers are in the Christmas Island immigration detention centre and 3,000 more are held on the Australian mainland.

Total arrivals in Australia this year are expected to be the highest on record.

Christmas Island, which has a permanent population of 1,400 people, is 360 km south of Java and 2,600 km northwest of Perth.

He said the tragedy 'highlights once again how very dangerous this business is of people coming by boat and why it's so important again that we do everything possible to ensure that these boats don't come in this way'.

Paul Power, head of the Refugee Council of Australia lobby group, urged the government to counter people smuggling by making it easier for asylum seekers to enter legally.

'It's well known how difficult and dangerous this journey can be, but so many asylum seekers continue to make this journey because they feel they have few real options open to them,' he said.