Congresswoman Laura Richardson continued her remarkable record of making major progress for port communities by introducing a bipartisan amendment that will ensure that the nation’s ports are prepared in times of crisis. 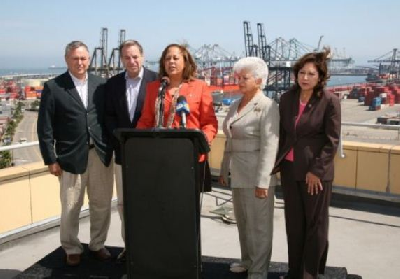 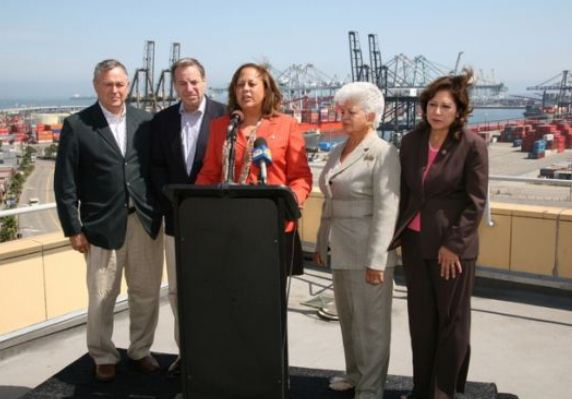 Congresswoman Laura Richardson continued her remarkable record of making major progress for port communities by introducing a bipartisan amendment that will ensure that the nation’s ports are prepared in times of crisis.

In 2009, Congresswoman Richardson was appointed by Speaker Nancy Pelosi and Armed Services Committee Chairman Ike Skelton to the National Defense Authorization Act (NDAA) Conference Committee. The NDAA of 2010 contained a provision inserted at the Congresswoman’s request directing the Department of Defense (DoD) to expand and update the scope of the Port Look 2008 Strategic Support Study to include consideration of the infrastructure beyond the facilities inside the port that are already covered and evaluate the vicinity of strategic ports, including bridges, roads and rail capacity.

The Port Look 2008 Strategic Seaport Study was adopted to develop and implement a plan to optimize the use of strategic seaports. Specifically, the study addressed cost effectiveness, manning requirements and location and maximization of utilization of resources for each strategic port.

The bipartisan amendment to the NDAA of FY2013 offered jointly by Congresswoman Richardson and Congressman Don Young strengthens the law by expediting the results of the report and ask the Comptroller General of the United States to review the extent to which the facilities at strategic seaports meet the DoD’s requirements.

“I have been working to advance the issues of port safety and security since I came to Congress several years ago,” said Congresswoman Laura Richardson. “Those of us who live and work in port communities, like California’s 37th District, know that we are only as secure as our ports. That’s why I sought and obtained an appointment to the Transportation and Infrastructure House Committee,” said Congresswoman Richardson.

“It’s for this reason that I offered an amendment along with my colleague, the highly respected and influential Congressman Don Young of Alaska, the fifth most senior member of the House and a former Chairman of both the Transportation and Infrastructure Committee and the National Resources Committee,” said Congresswoman Richardson.

Updating this report is vital in the assessment of the structural integrity and deficiencies of the port facilities and infrastructure improvements needed directly and indirectly to meet national security and readiness requirements. In addition to assessing the impact on operational readiness if the improvements are not undertaken, this report will identify potential funding sources for the needed improvements from existing authorities.

“If the transportation systems and infrastructure in and around our strategic ports are deficient, compromised or inaccessible, the ports will be unable to serve in their originating national security roles. After all, in times of war, the role of the ports is to protect the forts,” added Congresswoman Richardson.