The top US diplomat dealing with Caspian energy issues remains certain that a “southern corridor” taking natural gas from the Caspian Basin to Europe will be built. But the envoy added that Turkmenistan is unlikely to be one of the countries supplying the gas. 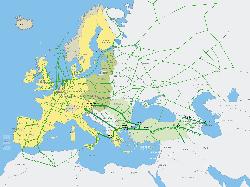 The top US diplomat dealing with Caspian energy issues remains certain that a “southern corridor” taking natural gas from the Caspian Basin to Europe will be built. But the envoy added that Turkmenistan is unlikely to be one of the countries supplying the gas.

“I'm as convinced as ever that there will be a southern corridor,” Richard Morningstar, US special envoy for Eurasian energy, said during a recent appearance at the Central Asia-Caucasus Institute in Washington, DC. A long-awaited sales and transit agreement signed in June between Azerbaijan and Turkey “certainly opens the door to that,” Morningstar said. “There is a lot of work to be done, but there will be a southern corridor.”

Morningstar said the United States still prefers the larger Nabucco pipeline to the smaller ITGI (Interconnector Turkey-Greece-Italy) and TAP (Trans-Adriatic Pipeline) projects. “In the abstract, Nabucco would be the preferable project. It's most advantageous from a political standpoint, from a strategic standpoint.”
But questions remain, he acknowledged, over where the gas would come from to fill the capacity of Nabucco.

Turkmenistan now looks like an unlikely prospect, he said. “Turkmenistan … is unlikely in the short term, frankly. Turkmenistan, for its own political reasons, is going to be very slow in making a determination to ship gas across the Caspian. But we'll see,” he said. Gas from northern Iraq, he said, was a more likely option, assuming that the central government and the Kurdish administration in the north came to an agreement on control of the gas.

Azerbaijan, which was already expected to provide a significant portion of the gas for Nabucco, may now be able to provide enough to fill the pipeline entirely, Morningstar said. On October 7, BP and the State Oil Company of Azerbaijan signed an agreement to tap the Shafag-Asiman structure off the coast of Baku, which SOCAR says may hold potential resources of 65 million tons of gas condensate and 500 billion cubic meters of natural gas. Morningstar called that agreement “a major, interesting development … if that is successful, there will be enough additional gas at some point from Azerbaijan to fill the Nabucco pipeline.”

Morningstar also said during his October 13 talk that he expected some sort of decision on a southern corridor route within a matter or months, and that it was likely to be an amalgam of the various proposed routes. “Ultimately, the project that has the most flexible approach will win out. The project that can start on a phased basis with a smaller amount of gas and then evolve into a larger pipeline will be the kind of project that will be most appealing to producers,” he said. Morningstar encouraged the parties involved in the southern corridor to take “as creative a look as possible at how to come up with what would be the most appropriate, flexible approach will be. There could be a consolidation, conceivably, among some of the projects. The time has come, for the companies and everyone involved, to show commercial creativity. And maybe we'll be surprised with what we see a couple of years from now.”

Another proposed natural gas pipeline, the Turkmenistan-Afghanistan-Pakistan-India (TAPI) route, shouldn't be counted out, despite the obvious political and security risks, Morningstar said. He noted that Turkmen President Gurbanguly Berdymukhamedov has made progress in getting the leaders of the four countries to work on the project, including a planned summit in Ashgabat in December.

But getting international oil companies to sign on to such a risky project would be difficult unless Turkmenistan allowed the company to develop the gas fields in Turkmenistan. “One of the reasons to possibly get involved would be if it made it possible to work onshore in Turkmenistan to develop the gas that would go into the project. ... I think it would be very difficult to get any company to get involved just to bring the gas from the border to these other countries,” as is Turkmenistan's usual policy, he said. “I'll never say never with respect to TAPI. The upside is tremendous.”

Morningstar said he did not perceive any military threat to a southern corridor, even though relations between Georgia and Russia remain tense following their 2008 war. “I don't believe that with the [US-Russia] reset and with the present geopolitical situation, that Russia would ever directly, militarily interfere with transit through Georgia,” he said in reference to President Obama’s recent policy shift toward Russia.

Editor's note: Joshua Kucera is a Washington, DC,-based freelance writer who specializes in security issues in Central Asia, the Caucasus and the Middle East.