International seafarer welfare charity The Mission to Seafarers announced the winners of its inaugural Seafarers Awards at a dinner in Singapore on May 11. 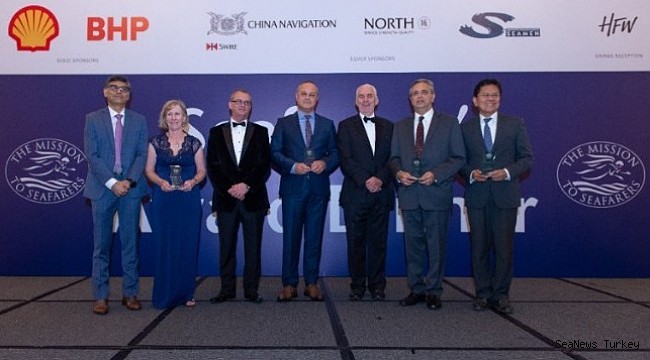 International seafarer welfare charity The Mission to Seafarers announced the winners of its inaugural Seafarers Awards at a dinner in Singapore on May 11.

The Award winners were chosen by judges Capt Kuba Szymanski - Secretary General of InterManager, Marlon Roño - President and CEO of Magsaysay People Resources Corporation, Esben Poulsson - Chairman of The International Chamber of Shipping, and The Revd Andrew Wright - Secretary General of The Mission to Seafarers.

The awards were made to seafarers and operational staff who made a significant contribution to the welfare of others:

Servet Akturk a Pumpman with Zenith Maritime from Turkey received an award for his significant contribution to the welfare of his fellow crew aboard the tanker Good Lady. A talented woodworker, Akturk has contributed greatly to the social life on board his vessel by making a pinball table for the crew and new equipment for the onboard gym. He also makes personal gifts for specific individuals and writes poetry. Akturk was nominated for this award by his Chief Officer who has seen the impact that his hobby has had on the rest of the crew.

The next award went to a Captain whose approachable and considerate leadership has supported his crew directly and positioned him as a true role model to his officers and others within his company, Via Marine Philippines. Captain Jonathan Adriatico’s patient and good-humored attitude has helped his crews grow and learn and has set an excellent example to other aspiring captains of the good that can be done in the role.

Captain Rajesh Unni was presented the award for the shore-based individual who had significantly contributed to seafarers’ welfare. Unni, who is the founder and CEO of Synergy Group, has had a tremendous welfare impact both on specific individuals and on the wider seafaring community. In addition to the financial support and low-interest loans offered to seafarers and his direct action to support greater gender equality in the maritime workforce, the judges were also impressed with his personal generosity. As well as supporting a number of charities with donations, Unni is a trustee of a cancer hospital in India where seafarers receive free treatment and a blood bank that seafarers can access free of charge. The award recognized Unni’s impressive lifetime commitment to the welfare of seafarers and his support to them through the issues they face.

The company award was given to an organization that understands that taking care of seafarers means development of the company and assurance of its future. MTM Ship Management was recognized for both the big and small contributions it makes to its seafarers’ well-being. Contributions like providing health insurance to seafarers and their families and sponsoring employees children through English proficiency courses sat alongside a caring attitude, such as open feedback sessions and recognizing birthdays and anniversaries with cards and gifts. MTM has created a compassionate community between their shore-based and seafaring employees.

The Secretary General’s special award for outstanding service to seafarers went to Peter Cottrell. Serving seafarers in Africa for over 20 years and always coming back to his mantra “will what I am about to do benefit seafarers?” Cottrell has worked to create the best possible environment for seafarers, often at significant personal expense. Joining the Mission as a volunteer in 1998, Cottrell soon joined the local committee and has since played a fundamental role in the strategic change and governance of the Mission as it regionalized to cover the African continent.

Lufthansa first half profit falls 99.1pc to US$4.1 billion as sales fall 52pc

US soothes feuding Japan and South Korea to unite on China