Three people remained missing as of Sunday evening after two Japanese cargo ships collided during the early morning hours off the coast of Chiba Prefecture, the Japan Coast Guard said. 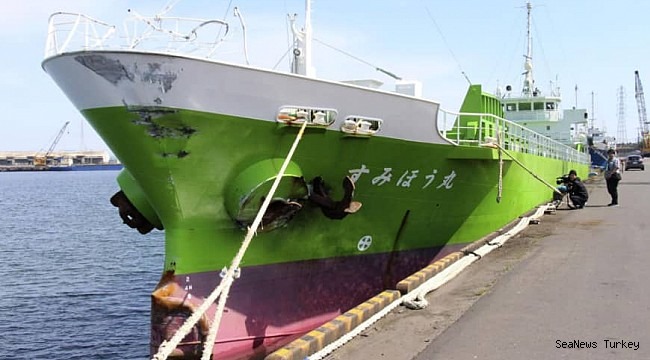 Three people remained missing as of Sunday evening after two Japanese cargo ships collided during the early morning hours off the coast of Chiba Prefecture, the Japan Coast Guard said.

The Japan-flagged cargo ships Sensho Maru and Sumiho Maru, both 499-ton vessels, collided about 12 km off Cape Inubosaki in Chiba Prefecture at around 2:10 a.m., and the Sensho Maru sank.

Hiraku Fujita, the captain of the Sensho Maru, was rescued, and one of the ship’s crew members was later confirmed dead. But as of Sunday evening the other three were still missing, a local coast guard official said.

According to the 3rd Regional Coast Guard Headquarters in Yokohama, a special rescue team discovered the sunken ship lying on the seabed with its starboard side facing up in about 30 meters of water.

The regional coast guard office in the port of Choshi said Akira Yano, 72, of Shizuoka Prefecture, was found inside the ship and was later confirmed dead.

The Sensho Maru, based in Imabari, put out a distress call following the collision.

All four crew members aboard the Sumiho Maru, based in Kure, Hiroshima Prefecture, were safe, the coast guard said.

The Sensho Maru was carrying about 1,300 tons of steel from Kashima, Ibaraki Prefecture, to Osaka Prefecture, it added.

Visibility was poor in the area at the time of the accident due to fog, the coast guard said.

An oil spillage was confirmed at the site, it added.

The coast guard sent five patrol vessels, a helicopter and a special search-and-rescue unit in a bid to find the missing men, and they were still searching after it got dark on Sunday evening.

The captain and the missing crew members are all Japanese, Kawaguchi added.

“I’m extremely worried about the missing crew members. I hope they will be discovered safe,” said Fumiko Fujita, wife of the Sensho Maru’s 60-year-old captain who was rescued.

Maersk reverses into a US$656 million loss as revenue rises 2.5pc