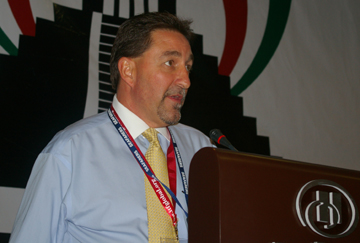 13 November 2014 - 23:50
ITF Condemns Sewol Ferry Sentences
The International Transport Workers’ Federation’s seafarers’ section chair, David Heindel, has condemned South Korea’s sentencing of the Sewol ferry Captain and crew, describing the 36 year sentence handed down to Captain Lee Joon-Seok as “excessive and unjust”.
In a statement, Heindel commented that the ITF believes the sentences handed down on Tuesday, ranging from five to 36 years in prison, were emotionally-biased, driven mostly by the general public’s outrage over the events.
Captain Lee Joon-Seok received a sentence of 36 years in prison after being found guilty of gross negligence over the deaths of more than 300 people, but he was spared a death sentence after being acquitted of homicide charges. Sewol’s Chief Engineer, Park Gi Ho, was found guilty of homicide and sentenced to 30 years in prison, while thirteen other crew members were sentenced to between five and 20 years for their roles in the accident.
“The ITF believes that the judgment is based more on emotion and the need to find someone to blame than justice,” stated Heindel. “The sentencing of the captain and the other seafarers is too severe and does not take into account the actions or lack of actions by others in the industry.
“The ITF seafarers’ section committee will meet next week in to London and consider an appropriate ongoing response to this tragic matter,”
This news 6331 hits received.