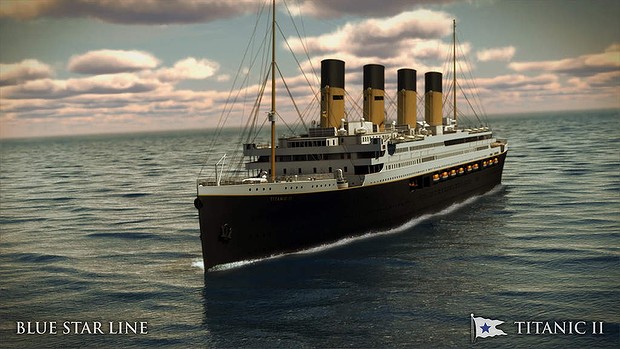 Mr Palmer said a 9.3m wooden model of Titanic II will be put through resistance and powering tests in a 300m long tank at HSVA’s Hamburg facilities in mid – September. Titanic II is scheduled to be launched from its construction base in China in 2016, before her maiden passenger voyage retracing its original journey from Southampton to New York.

“This model testing by HSVA will be an important stage in the Titanic II project,” Mr Palmer said. “The Titanic II model is to be tested in the HSVA tank at speeds of between 18 and 24 knots. This testing is crucial for assessing the speed and power performance of this prototype vessel design.”

HSVA Director of Resistance and Propulsion, Dr Uwe Hollenbach, said HSVA was delighted to be part of the historic Titanic II project in the company’s centenary year. “Model testing is the only accurate and reliable method for a passenger vessel prototype such as Titanic II,” he said. “Titanic II is a prototype as present day passenger vessels have a completely different type of main hull parameters and therefore are unsuitable as references. The speed and power performance model testing is one of the critical aspects for a prototype vessel and needs to be verified before a construction contract is completed.”

On April 30, 2012, Mr Palmer announced to the world his intention to build and launch Titanic II. The announcement came 100 years after the original vessel last sailed. The RMS Titanic was commissioned by White Star Line and was the largest liner in the world at just under 270m long, 53m high and weighing approximately 40,000 tonnes.

Mr Palmer said Titanic II would have similar dimensions as its predecessor, with 840 rooms and nine decks. The only changes to the original Titanic would be below the water line including welding and not riveting, a bulbous bow for greater fuel efficiency, diesel generation and enlarged rudder and bow thrusters for increased manoeuvrability.

HSVA is a private and independent company which has been at the forefront of hydrodynamic research and testing technology since 1913.