Hamburg to be able to dock three 20,000-TEUers when new cranes arrive

BIMCO near doubles forecast for scrapping box ships to 400,000 TEU

BIMCO has raised its forecast for demolition sales of containerships in 2016 to 400,000 TEU from 250,000 TEU predicted January. 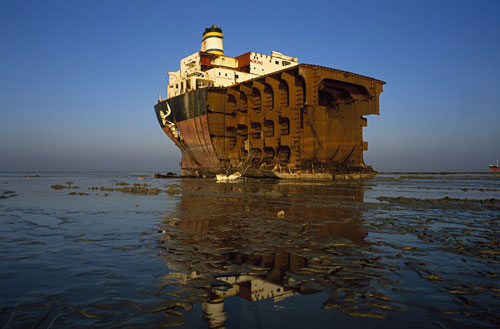 BIMCO near doubles forecast for scrapping box ships to 400,000 TEU
BIMCO has raised its forecast for demolition sales of containerships in 2016 to 400,000 TEU from 250,000 TEU predicted January.
"Overall container demand grew around two per cent in the second quarter compared to the second quarter of 2015. Global container demand is struggling to achieve a GDP-to-trade multiplier of one," said BIMCO chief analyst Peter Sand said in a newly published report.
He predicts that tonnage would increase by eight per cent in gross terms until 2018, while demolitions would only account for three per cent of the fleet this year and two per cent in 2017 and 2018, reported IHS Media.
"For the full year to balance out between supply and demand growth, we need demand to grow in the third and fourth quarters. Year-to-date the balance has worsened. Demand has been slow, part of the idle fleet has been reactivated and new ships have outstripped the number of ships being demolished," Mr Sand said.
Although demolitions can help balance supply and demand, most of the new vessels shipping lines are deploying are very large, while demolitions tend to target smaller ships. This makes it difficult for demolitions to have a direct impact on capacity.