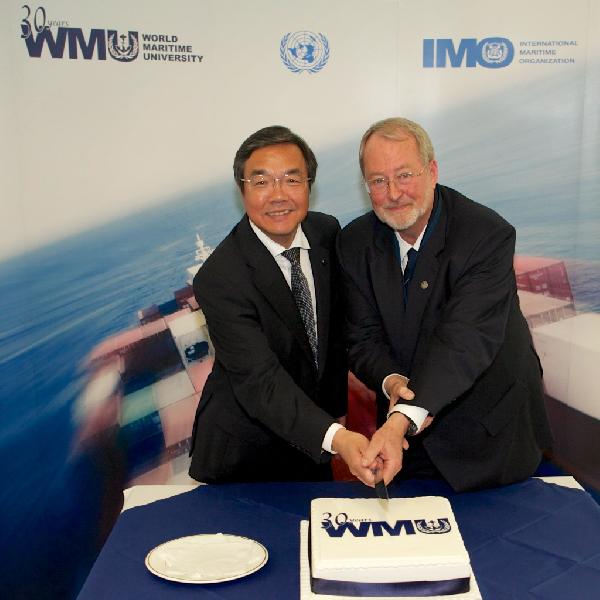 The International Maritime Organization (IMO) on Wednesday (10 July 2013) celebrated the 30th anniversary of the founding of the World Maritime University (WMU), which is based in Malmö, Sweden, with a special event which included speeches from the current and former WMU Chancellors and the WMU President. ”For 30 years, WMU has performed, and delivered, at the very highest level. It has achieved everything its founders could ever have envisaged, and much, much more. It has grown into an institution of truly world class, with an international presence and a global outreach,” said IMO Secretary-General and WMU Chancellor Koji Sekimizu, who also read out messages of support from Mr. Yohei Sasakawa, Chairman of the Nippon Foundation, which has given much support to WMU over the years, in terms of sponsorship and financial assistance, and from the ”founding father” of WMU, IMO Secretary-General Emeritus Dr. C.P. Srivastava, KCMG, who was instrumental in establishing WMU when he was IMO Secretary-General.  The other speakers included:  Mr. William A. O'Neil, CMG, Chancellor Emeritus and Secretary-General Emeritus; Mr. Efthimios E. Mitropoulos, Chancellor Emeritus and Secretary-General Emeritus; Dr. Wendy Watson-Wright, Assistant Director-General, United Nations Educational, Scientific and Cultural Organization (UNESCO) and Executive Secretary, UNESCO Intergovernmental Oceanographic Commission (IOC-UNESCO); Mrs. Nancy Karigithu, Director General of the Kenya Maritime Authority, Kenya, Chairman of IMO’s Technical Co-operation Committee and Member of the WMU Board of Governors; Mr. Cong Peiwu, Minister at the Embassy of the People’s Republic of China in London; Dr. Takeshi Nakazawa, Secretary, International Association of Maritime Universities (IAMU); Mr. Torben Skaanild, Secretary General/CEO of BIMCO and Chairman, WMU Executive Board; and Dr. Björn Kjerfve, President, WMU. WMU was established at the beginning of the 1980s, when IMO identified a shortage of well-qualified, highly-educated maritime experts, particularly in lesser developed nations. It was to address this gap that IMO founded an institution to support Member States with the high level education necessary to implement international conventions. WMU today offers its original Master of Science degree, but also, in addition to six specializations available within the Malmö M.Sc. programme, there are now M.Sc. programmes in Shanghai and Dalian, China and a Ph.D. programme offering five specializations, within a flexible framework allowing the majority of the programmes to be completed from afar. Distance-learning is available as well, with a Postgraduate Diploma in Marine Insurance through co-operation with Lloyd’s Maritime Academy.  In addition, WMU utilizes its extensive network of international maritime experts to deliver a broad programme of professional development courses in Malmö, with the potential for tailor made courses at any location worldwide. WMU has also been taking advantage of its extensive network to organize and host a series of international conferences, in a significant expansion to the services it has traditionally offered the maritime community. Recent topics have included oil spill risk management, piracy at sea, emerging ballast water management systems, the impact of climate change in the maritime industry and ship recycling. Research projects currently underway include those in important areas such as mitigating invasive species in the arctic, risk assessment, maritime spatial planning, e navigation and safety of life at sea.  To date, 3,477 students from 164 countries have graduated from WMU and many hold very senior positions - Government ministers,deputy ministers, ambassadors to other countries. Some have pursued career paths to occupy senior positions in shipping companies, regional maritime organizations and national port and harbour authorities. Mr. Sekimizu thanked the Government of Sweden and the City of Malmö for generously providing WMU with its facilities, noting that, at the end of 2014, the University will move to Tornhuset, the historic Old Harbour Master’s Building in the centre of Malmö, which will be supplemented by a dramatic new, modern addition designed by a leading Scandinavian architect. In total, this move will virtually double WMU’s floor space and provide a strong foundation for even more growth and development for this remarkable instituition over the next 30 years and more.

CONGRESSIONAL SYMPOSIUM ON THE EXPANSION OF THE PANAMA CANAL